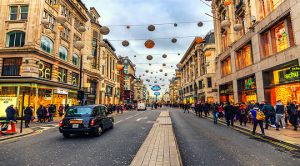 Hopes for a significant pick up in High Street sales in May have been dashed,  says  the home delivery expert ParcelCompare. It says today’s Office of National Statistics (ONS) retail figures show sales falling back compared to April’s; and even online spending growth stalling.

ParcelCompare’s Head of Consumer Research, David Jinks says: ‘ March winds and April showers discouraged shoppers, but were supposed to fuel flowering sales in May. However total retail sales actually fell -0.5 by volume and -0.3% by value against April.’

Adds David: ’Clothing sales slumped -4.5% in this critical month for summer fashions; while department stores’ sales have tumbled -0.9% in the last three months, and a terrible -2.4% against May 2018.

Even retail’s white knight, e-commerce, failed to save the day, with 0% growth against April. It captured 19.3% of overall shopping spending in May, exactly the same as April. The only online sector to see growth was necessity spending on household goods, up 3%. While the weather can be blamed for a poor May on the High Street, it looks like we have other factors, such as the Brexit fiasco, to blame for an overall lack of consumer confidence online.’